Create an Account - Increase your productivity, customize your experience, and engage in information you care about.

Prior to the incorporation of the Village of Flossmoor on June 20, 1924 the Homewood Volunteer Fire Department provided fire protection for the Flossmoor area. After incorporation as a Village, thoughts moved to providing some of the essential firefighting services. On March 5, 1928, Ordinance # 44 was passed which provided $12,500 to finance the creation of a Fire Department and to purchase the necessary equipment.

John Smith was appointed the 1st Fire Chief and George Busse the 1st Assistant Fire Chief by Village President A.F. Hunt on August 6, 1928. President Hunt also appointed a Fire Committee of Chairman E.T. Wiltsee, L. Harms, and C. Huston to maintain communications with the newly formed volunteer Fire Department. The Village Board purchased the 1st fire engine on September 6, 1928 from American La France Company for $7,125. This equipment arrived in the Village in December 1928, and the Fire Department began responding to calls for help.

On December 26, 1928, the 1st meeting of the new department was held and Harvey G. Hyde, George I.M. Busse, George L. Harris, and John S. Smith filed with the Secretary of State of Illinois to incorporate the Flossmoor Volunteer Fire Department. The charter members of the Fire Department, besides those named above, also included A.W. Tatge, Charles Huston, Frank Condon, and Harry Wise. The original charter states that the Fire Department was formed with the objective "to perfect and maintain a volunteer Fire Department for the promotion of fire prevention and active service in case of fire in the Village of Flossmoor and to conduct and to carry on such social and business enterprises as promote the purposes of the organization."

The newly formed Fire Department continued to work under a "gentlemen's agreement" with the Homewood Volunteer Fire Department. Over the years, the 2 departments have developed a close working relationship. The Villages of Homewood and Flossmoor improved upon their long-standing tradition of cooperation in January 1987 when a new aerial ladder truck was delivered. This truck was the culmination of a joint cooperative agreement between the 2 Villages. 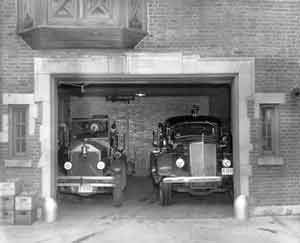 As the community continued to grow, so did the Fire Department. In 1951, a new Village Hall was constructed at the corner of Park Drive and Sterling Avenue. At that time, the Fire Department moved into their new fire station located on the west side of this building. 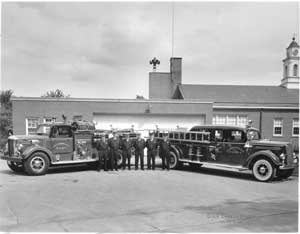 This remained the primary means of notification until the mid 1970's when the use of radio pagers was instituted. The siren remained as a back up until the Village Hall on Flossmoor Road was built in 1979. At that time the use of the siren for notifying the Fire Department was discontinued. 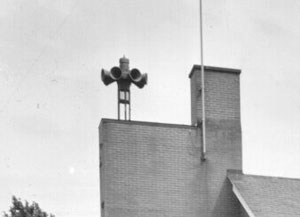 During the early 1970's the Village of Flossmoor through Fire Chief Peter Vandercook began discussions with the Sunnycrest Fire Protection District concerning the delivery of services to the unincorporated area adjacent to Flossmoor. On June 1, 1975, the Sunnycrest Fire Protection District entered into a contractual agreement for the Flossmoor Volunteer Fire Department to provide services to their area. As a result of this contract, the 2 Fire Departments joined forces and this contract remains in effect today. 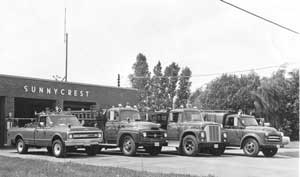 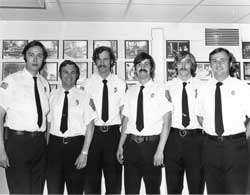 After passing the state certification examination and being observed in the field by nurses from Ingalls, the Flossmoor paramedics became operational in September 1974. The demand for emergency medical services has grown from 102 EMS requests the 1st year to the point where the Flossmoor paramedics are currently called upon to assist residents approximately 617 times each year.

The 1st employee of the Fire Department was hired on October 18, 1976 when Gregory C. Berk was appointed to the position of Administrative Assistant to the Village Manager for Fire Services. On May 1, 1978, Gregory C. Berk was appointed by Mayor Bert Reed, Jr. as the 1st full time Fire Chief for the Village of Flossmoor. In February 2003 Chief Greg Berk retired as the Fire Chief of the Flossmoor Fire Department. 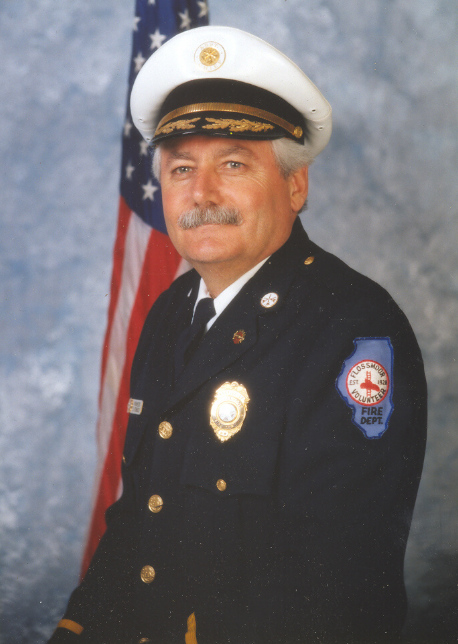 On September 28, 2009, former Flossmoor Fire Department Training Administrator Chris Sewell was hired as the Fire Chief to replace Chief Hornback upon his retirement. Chief Sewell continues to serve as our Fire Chief today. 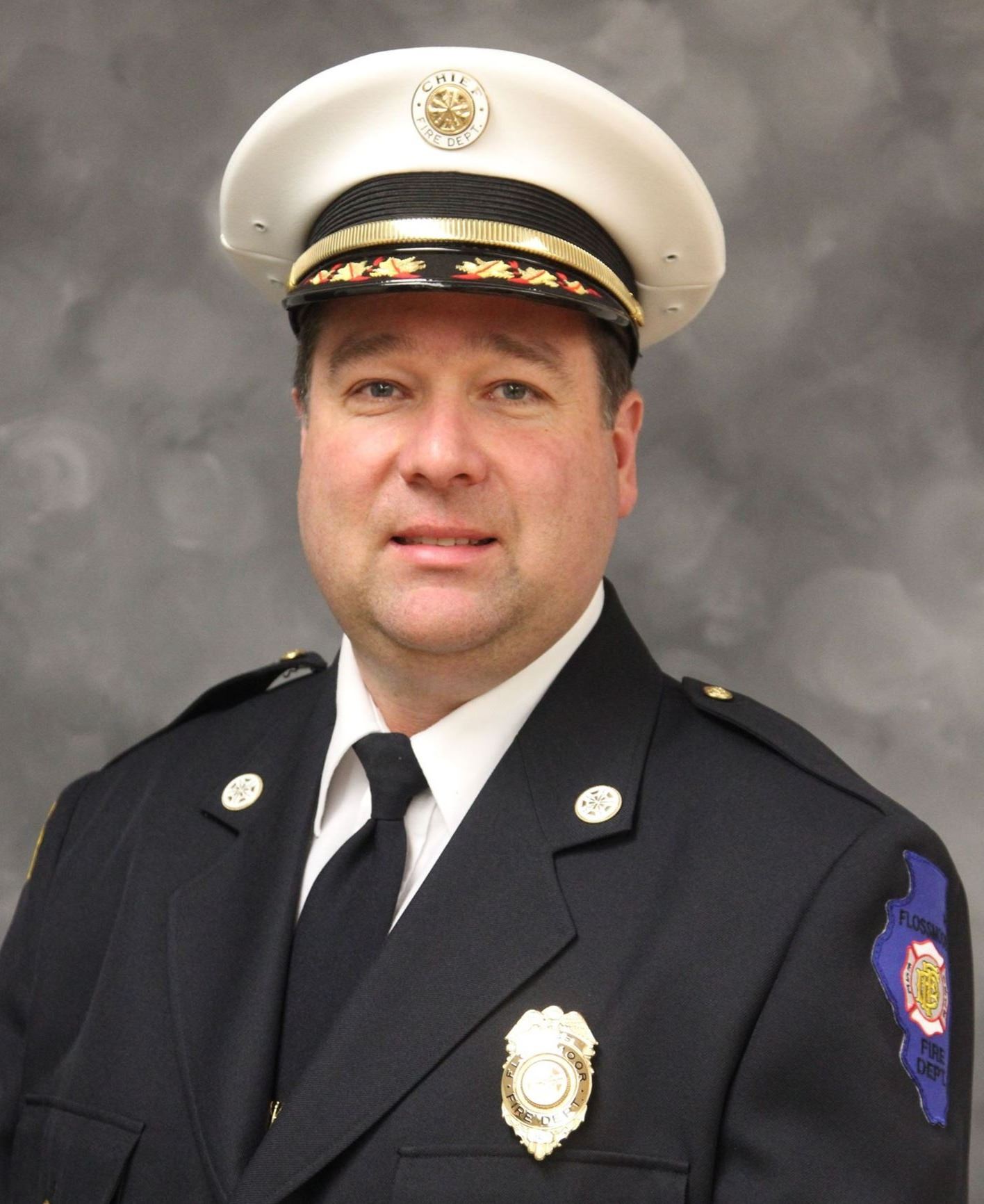 February 21, 1978 saw the formalization of a mutual aid system when Mayor Bert Reed, Jr. signed the Master Mutual Aid Agreement of the 3rd District Chief's Association. This association consists of 24 communities surrounding Flossmoor who joined together in order to insure assistance during any time of need. Shortly after this agreement was signed by all of the communities the 3rd District Chief's Association created a predetermined emergency response for all of the member departments (Box Alarm System). This Box Alarm System assists Flossmoor during a large fire or medical emergency by providing assistance from neighboring communities whenever a fire officer calls for help. The neighboring communities respond based upon a response schedule determined prior to the emergency occurring.

July 7, 1979 marked another milestone when the department moved into its present quarters in the new Village Hall, which is located on Flossmoor Road.

Service demands from the community continued to increase to the point where simultaneous calls were occurring more frequently. In order to address this problem, the Village entered into a cooperative agreement with Hazel Crest and Homewood in May 1987. This agreement provides a backup ambulance shared by all 3 communities.

This backup ambulance is available to any of these communities should their primary vehicle be taken out of service for any reason. During 1987, Flossmoor utilized this vehicle for approximately 4 months while our primary vehicle was in the shop having a new chassis installed.

During the summer of 1988 the Fire Department and South Suburban Hospital completed details for a physical fitness program for all department personnel. On December 2, 1988 the Flossmoor Volunteer Fire Department celebrated its 60th anniversary of service to the Village of Flossmoor.

In September 1988 the 3rd District Chief's Association formed a Hazardous Material Response Unit. At that time, Flossmoor became a member. The purpose of this unit was to provide both technical expertise and the necessary resources to stabilize any incident involving hazardous materials.

In April 1990 Flossmoor took delivery of a new tanker/pumper. Pierce Manufacturing Company in Appleton, Wisconsin constructed this unit. The unit was designed by members of the Flossmoor Volunteer Fire Department in order to comply with all of the new safety guidelines regarding fire apparatus.

There were 2 important program changes accomplished with the adoption of the May 1, 1990 Budget. The 1st included the officers of the Flossmoor Volunteer Fire Department completing a thorough review of the capital equipment needs of the department. As a result of that review, the capital equipment schedule was changed to allow for the deletion of 1 engine company. This change resulted in significant savings for the Village of Flossmoor. Secondly, the Sleeper program was expanded to provide year-round coverage. This program has 3 members sleeping in the Fire Station each night.

In January 1995 the Village executed a contract with Sutphen Corporation to construct a 70-foot aerial platform. This vehicle took just over a year to construct and was delivered in May 1996.

The year 1997 saw a continuing trend of an ever-increasing number of service requests from our residents (484 EMS calls). The department continues to respond to emergencies at a record level. On November 18, 1997 the Department put a new ALS ambulance in service. A short ceremony was held to place ambulance (1372) in service. Former Mayor Roger Molski dedicated the new ambulance and Rev. Jarrett Kerbel of St. John's Church provided a blessing for the ambulance. The old ambulance (1370) was kept in service as a Basic Life Support (BLS) back up vehicle until 1999 when it was re-licensed as a second Advance Life Support unit.

In 1998 the department celebrated its 70th anniversary. As the demand for emergency responses continued to increase, the Department was forced to review its staffing levels. The demand for service had caused undue pressure on the volunteers. In the annual budget proposal the department recommended the Village consider hiring additional full-time staff. Following the budget hearings the Village Board approved hiring 6 contract firefighters/paramedics. In November 1998 the Village approved a contract with Kurtz Ambulance Service for 6 firefighter/paramedics. On December 14, 1998 these new contract employees started work.

In the fall of 1999 the Village Board approved a contract for the purchase of a replacement engine for Engine 1340 (a 1979 Ford/Pirsch). The replacement vehicle for Engine 1340 was delivered to Flossmoor in July 2000. After mounting small equipment and conducting local tests on the new engine it was sent back to the facility in Lyons, South Dakota for warranty and specification compliance work.

While returning to the factory the engine was struck in the rear end by a gravel truck. Major damage was done to the vehicle. On September 7th, 2000 Chief Berk and Assistant Chief Hornback flew to South Dakota to assess the damage and plan out the reconstruction. The vehicle, fully repaired, was delivered in February 2001.

In 2000, the Flossmoor Volunteer Fire Department joined the multi-agency CART. CART is a special rescue team that is trained to deal with High Angle Trench, Confined Space, and Structural Collapse Rescues. Flossmoor was assigned to the Grey CART Team with Hazel Crest, Harvey, Homewood, Oak Forest, Park Forest, and Matteson.

In 2001, Flossmoor purchased a technical rescue trailer as part of a joint effort between the Fire and Public Works departments. The trailer is to be used for CART as well as to comply with Illinois Department of Labor IDOL requirements placed upon Public Works for Confined Space and Trench requirements. The trailer and all associated equipment were purchased for $30,886. Department members were trained and validated to CART Level II skills and are currently ready to respond to any Technical Rescue incident. In 2002 members will concentrate on achieving Level III validation, which deals with Structural Collapse Incidents. With the tragic events of September 11, 2001, this training somehow seems more important to the members than ever before.